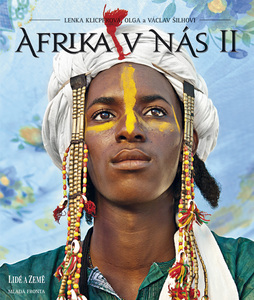 This photo book introduces Sub-Saharan Africa, the beauty of its countryside, and its disappearing customs and traditions. It also looks into the burning issues the continent is troubled with. The book introduces unique images of the local people and animals supplemented with texts.

The trio of photographers is connected not only by personal friendship, but also by their love for Africa which they present in its raw beauty. “We are bonded by friendship which has stood the test of years of joint travels. When in countries such as Chad or Congo you have to be convinced you really know the person you are travelling with. We are joined by our love for this crazy African continent, full of antitheses and contrasts and unpleasant things, euphemistically speaking. I think what’s significant is that thanks to Olga and Vaclav Silha’s writing the book captures the inimitable beauty of African nature. It’s something that has to be seen and experienced; only a few have the gift to put this beauty into words”, says Lenka Klicperová.

The journalist and photographer Lenka Klicperová takes the readers to the Cure salée celebration of free love in Niger and presents Gerewol, a traditional male dance. She shows the difficult life of the people living in the refugee camps on the Chad-Sudanese border and presents the hard stories of child soldiers in Uganda.

The husband and wife team of Olga and Vaclav Šilha introduce the natural wealth of Africa. They take us through the desert and the wild coastline of Namibia and portray the critically endangered nature of Madagascar. The book also brings unique images taken by Vaclav Silha of a herd of hippos attacking a crocodile. The pictures have been seen worldwide.

“I had an opportunity to speak to dozens of former child soldiers in Uganda. They experienced such horrible things that it made my blood run cold. Some of the young people only managed to escape the LRA a week previously. The LRA is one of the most brutal armies in Africa; they steal children from villages and make them into killing monsters.”

“A happier chapter in the book is from a festival of love in northern Niger called Cure Salee – a whole week of dance and free sex. The men cover their faces with incredible make-up and are so decorated that one feels that they are beings from another planet or different era,” says Lenka Klicperová.