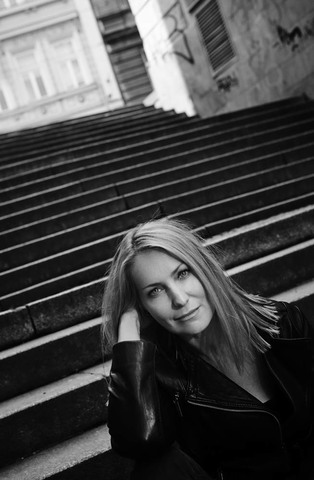 The journalist and photographer Lenka Klicperová started her career as a news reporter. From 2004 till 2018 she worked as editor-in-chief of Lidé a Země magazine, one of the oldest periodicals in the Czech Republic which focuses on reportages from abroad.

Klicperová visited a number of African countries and worked in Angola, Namibia, Nigeria, Tanzania, Kenya, Ethiopia, Mali, Burkina Faso, Chad, Niger, and DR Congo. She also traveled to Afghanistan several times as a journalist. Since 2014 she has covered the war against the Islamic State in Iraq and Syria.

Since 2016 she has regularly contributed stories and photographs to the Reflex weekly magazine. She is a co-author of several documentary films (Tears of Congo, Latim – Circumcised, Iraqi Women, Women in the Land of the Taliban, and Unbroken) and a number of television reportages. Her work appears in the various printed periodicals and on TV and the radio. She also gives talks on her work and experiences. She has received nine awards and nominations in the Czech Press Photo competition, both for photographs and video production.

In 2010, Mlada Fronta, a Czech publishing house, released a book called Africa Within Us which Klicperová wrote in collaboration with Olga and Václav Šilha and which became a prequel to Africa Within Us II. Her work in Syria resulted in two books entitled In Sight of the Islamic State I and In Sight of the Islamic State II, which were coauthored by Markéta Kutilová. After their first trip to Syria Klicperová and Kutilová started a public fundraiser called SOS to support schools and health care facilities in the northern Syrian town of Kobani.

In 2018 Klicperová and Kutilová published their third joint book In the War. It tells stories of people affected by the war in Iraq and Syria.

In 2018 Forbes magazine (Czech edition) rated Klicperová among 18 most inspiring people of the year.

In 2019, a book called AK47 was published. It focuses on the dramatic life of the world-famous Czech war photographer Antonín Kratochvíl. Klicperová wrote the text of the book, which she processed from Antonín's narra­tion. The other two books were published again with Markéta Kutilová in 2020 – War is my Fate (focused again on Syria) and Medics on the First Line. The book deals with the struggle of health professionals with the disease COVID –19 in the Czech Republic. In September 2020, war broke out in Nagorno-Karabakh. Lenka Klicperová and Markéta Kutilová quickly moved to the center of fightings. The war in the Caucasus was captured in many reports, but also in the book The last One sets the Village on Fire (Euromedia 2021).

Klicperová cooperates with a number of the Czech media, primarily with the Reflex magazine and the Reporters of Czech Television. She has received more then ten awards and nominations in the Czech Press Photo competition, both for photographs and video production. She also lectures at the University of Hradec Králové.

In 2020 she was included in the prestigious Women Photograph database, which includes the best photographers from around the world. (more info https://www.womenphotograph.com/