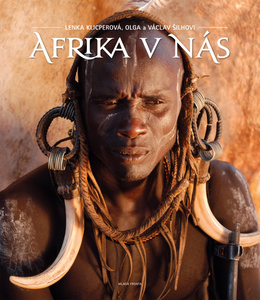 This photo book was written by three Czech authors who specialize in Sub-Saharan Africa.

The eloquent images illustrate the stories of people and animals and the dramatic descriptions of their situation and origins. The project is a unique link of two different perspectives: a female and a male photographer. Each photographer concentrates on distinct subjects and interprets them differently.

Lenka Klicperová mainly pursues the gradually disappearing traditional world. She photographs Fourth World people who are being slowly absorbed by the expanding western civilization, but she also captures the life of ordinary Africans, which is changing faster and faster year after year. Her work carries a strong journalistic element, reminding the viewer of her professional journalistic background. As a journalist she also worked in the war-stricken eastern part of the Democratic Republic of Congo.

Václav Šilha focuses on photographs of wild nature, in Africa and elsewhere. But Africa is his main love and he dedicates himself to documenting one of the biggest migrations of animals on this planet, the endless pilgrimage of forest giraffes from Tanzania to Kenya. He builds a photographic narrative for a viewer who can complete the rest of the story. His photographs are lively, dramatic and distinctive. Besides African nature, he also applies himself to environmental issues.

The third co-author, Olga Šilhová, Václav Šilha’s wife, is a link between the two photographers. Klicperová and Šilha have never worked in Africa together but Lenka Klicperová travelled with Olga Šilhová to the Democratic Republic of Congo and to northern Kenya. Olga also writes articles to accompany Václav Šilha’s photo­graphs. The three authors are linked by personal friendship and their love for Africa, a continent which can be either loved or hated, but nothing in between.