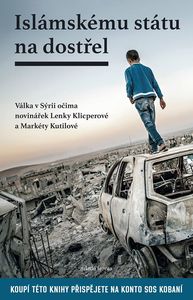 In sight of the Islamic State

The war, Islamic State, abductions, torture, slaughter, orange robes, rape, bombings, refugees… and fear. Those words come to everyone’s mind in connection with the Syrian conflict and the journalists Lenka Klicperová and Markéta Kutilová were no exception when they started playing with the idea of going to Syria and to travel as far as Kobani, a city which has become the Stalingrad of the Middle East. A city which was the first to get rid of the Islamic State terrorists.

They are the first Czech journalists to who have visited Kobani since the city was re-captured. Their book, accompanied by vivid photographs, tells stories of the brave resilient people living in the ruins of their homes or fighting on the front lines close to the Islamic State positions. An insightful epilogue written by the political scientist Tomáš Kaválek places the story into the broader context of the Syrian War.

A proportion of the book sale profits will go towards the SOS Kobani fundraiser set up by the authors. You can order the book on pomockobani@gmail.com.