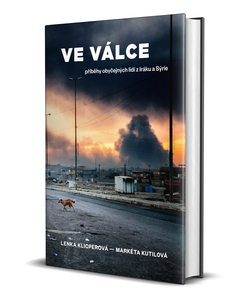 Lenka Klicperová and Markéta Kutilová have been great friends and have made a well-coordinated journalist team for 10 years. In 2008 they were brought together by a common interest in the fate of raped women in the Democratic Republic of Congo. Since then they have taken many trips together, written hundreds of articles, made dozens of television reports, and published two books (In Sight of the Islamic State I and In Sight of the Islamic State II).

During their seven journeys to Syria and many others to Iraq, they collected hundreds of stories of ordinary and extraordinary people. Some had been experiencing war for many years, while others had just had their lives turned upside down by the same circumstances. Therefore, their third book bears a simple title: In War. However, Klicperová and Kutilová present more than victims’ stories and readers also gain an insight into the stories of people fighting and risking their lives in battles as well as into the confessions of those who stand with ISIS; i.e. ISIS fighters and their wives.

"When you face a member of the Islamic State, you cannot get rid of the feelings of resistance and antipathy. Yet afterwards you sit with his wife and children who love him boundlessly. A week later you engage in combat next to women who are ready to die while fighting ISIS. Then you spend two days with a boy without a leg, then with another one without a hand… We carry these stories inside ourselves. The book is a way of talking about evil, but it is also a form of therapy for us,” says Markéta Kutilová.

"In wartime, you quickly recognize a true friend. Hard situations can either connect people or create hatred that will go on for generations. I will not forget the grief of the female fighters who mourned their deceased soldier comrades at a funeral. I understood them. Markéta Kutilová and I have been through so much together, unpleasant situations on the battlefront, and fear, but also through so many happy moments even though they all took place in a war zone,” says Lenka Klicperová.

Published by Universum, 2018. You can order the book here